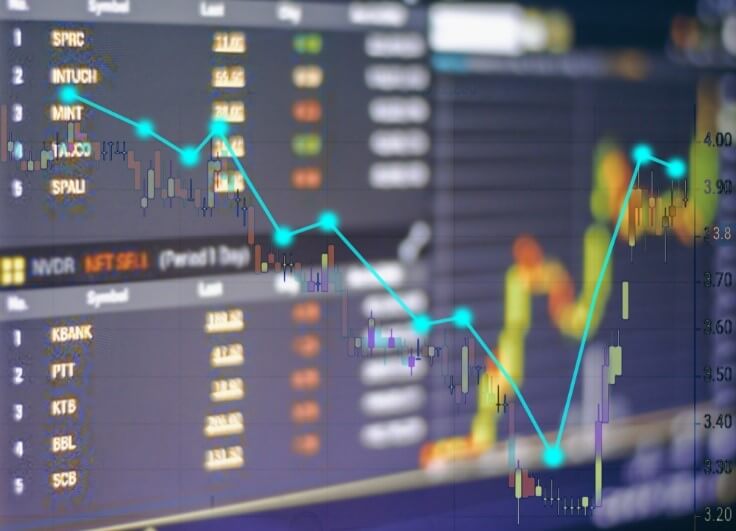 Wall Street closed with an increase on Friday and closed its sixth consecutive month on the rise. It reflected that the economic recovery continues to advance in the US, although last week ended with losses due to a host of factors that generated volatility.

The last day of the week ended with a 0.4% drop for the Dow Jones and the S&P 500. Meanwhile, Nasdaq registered a notable decrease of 1.1%, coinciding with the quarterly results of the big technology companies and the high expectations about them.

Despite everything, Wall Street said goodbye to volatile July.

The US economy is Flourishing But Still Faces Big Problems

The evolution of the pandemic has been one of the main factors that determined the market’s movements. The spread of more transmissible variants such as the Delta on top of the stagnation in vaccinations has been the primary source of distress for authorities.

With two-thirds of the population vaccinated, positive cases in the US have risen to 50,000 daily in the last week. It prompted the Joe Biden Administration and some companies to demand workers be immunized.

Meanwhile, the US economic recovery is developing, as reflected by the higher inflation of 5.4% in June. Besides, in the second quarter, US GDP grew by 6.5%. The data indicates that pre-pandemic levels are returning.

However, analysts state that there have been some disappointments in the critical numbers. The economic data showed that demand continues to rise faster than supply and the labour market remains weak.

On the other hand, the Federal Reserve decided to keep interest rates low despite rising prices. It will continue to purchase extraordinary assets to sustain the country’s economy, setting aside the possibility of an immediate withdrawal of the stimulus.

The round of quarterly results has been generally positive. Still, on Friday, the e-commerce giant Amazon suffered its worst trading day since March 2020. It resulted from worse than expected quarterly reports, despite exceeding 100 billion dollars.

On the other hand, experts have also pointed to the influence of Beijing’s plans to impose restrictions on some sectors. At the same time, the Securities Market Commission on Friday demanded new requirements for Chinese companies that want to start trading on Wall Street.

Hong Kong stocks rebounded from their most significant monthly loss in almost three years. The Hang Seng closed with a rise of 1.06%, adding 274.77 points to 26,235.8. Meanwhile, the index that measures the behaviour of mainland Chinese companies listed on the Hong Kong stock market, the Hang Seng China Enterprises, rose 1.12%.

Among the sub-indices, only Services declined, losing 0.1%. Meanwhile, Finance increased by 0.92%, Trade and Industry added 1.19%, and Real Estate advanced by 1.31%. The most prominent stocks were China Resources Land gaining 4.81%, or Hang Lung Properties increasing by 4.48%.

In the financial area, only AIA closed in red, slipping by 0.43%.

The largest bank in Europe, HSBC, hiked by 0.93%. It followed the publishing of its first-half income statement today, which recorded a 268% year-on-year rise in net profit.

The session has been outstanding for the BYD vehicle manufacturer, which surged by 8.03%. The company attracted the attention of investors interested in the progress of the electric market in China.

As for the Chinese state companies, the day has been amazing for oil firms. Petrochina added 1.85% to its value. Besides, telephone operator China Unicom gained 2.86%.

Tokyo stocks ended sharply higher on Monday as investors moved to raise shares after a sharp decline last week on concern about the country’s economic recovery.

The hunt for undervalued assets was the trend today after the benchmark dropped to almost 2.5% on Friday and reached its worst level in six months, given the records of new daily COVID-19 infections in Japan.

All sectors except air transport advanced today, with shipping and metallurgy leading the gains.

The shipping company Mitsui OSKLines surged by 10.61%, and the steelmaker Nippon Steel climbed by a remarkable 5.52%.

On the other hand, the textile giant Fast Retailing, owner of the clothing chain Uniqlo, lost 0.17%. However, the world’s largest car producer, Toyota Motor, gained 2.29%.

The two leading airlines in the country, Japan Air and All Nippon Airways (ANA), dropped by 0.83% and 0.78%, respectively.

The Seoul Stock Exchange advanced today due to the optimism generated by the South Korean trade balance data for July published at the weekend.

The South Korean market opened higher after it was reported on Sunday that South Korean exports grew 29.6% year-on-year in July amid strong global demand for cars and chips.

At one point, the selective regressed to negative territory due to the doubts generated by China’s reform plan for its large technology companies. However, purchases by foreign and institutional investors ended up bringing a moderate rise in the Kospi.

In the biopharmaceutical sector, Samsung Biologics climbed by 2.58%. Its competitor Celltrion expanded by 3.94%.

In contrast, Navar, the group behind the most prominent Internet search engine in South Korea, closed flat. Kakao, the operator of the most popular messaging application nationwide, lost 0.68%.

Analysts stated that the strong buying in the Asian markets became reflected in the European stock markets. Moreover, they also noted that the expectation that the monetary policy will remain supportive for a while. This is due to the concerns about global economic activity increased the risk appetite.

The manufacturing industry Purchasing Managers Index will be announced in Europe and the US today.