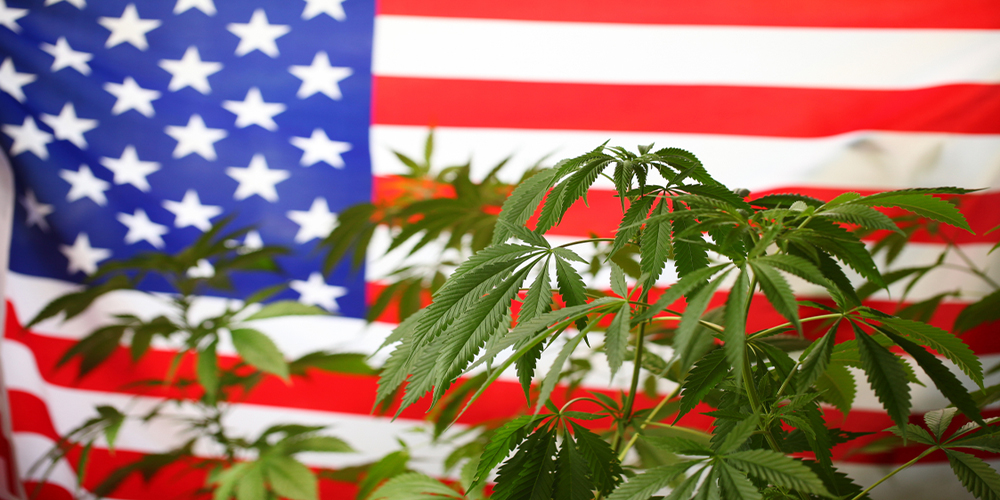 The North American cannabis markets have been making since 2018, when Canada enacted full legalization of the plant and its derivatives at the national level. Since then, the Canadian cannabis sector has boomed. Conditions are different, but still bullish, south of the border, where the US remains a patchwork of legal regimes.

As the Biden Administration entered office, there was some speculation that the new Democratically controlled Congress would move to enact Federal-level cannabis legalization. The contingencies of politics and world, however, have derailed those hopes. With Democrat control of the Senate hinging on VP Harris’s tie-breaker vote, and the Democratic majority in the House down to just a few seats, the Party and Administration have no Congressional votes to spare – and for now, cannot be seen ‘pushing cannabis’ the country grapples with high inflation, a labor shortage, a $3.5 trillion spending plan working through the legislature, and the events in Afghanistan.

While the US market is fragmented into State-level entities, and somewhat stymied by a lack of Federal action toward legalization, it remains substantia. Legalized cannabis sales in the US hit $17.5 billion last year, and were $12.9 billion in 2019. Industry analysts expect cannabis sales in the US to exceed $41 billion by 2026. These numbers dwarf their equivalents in Canada, where even with full legalization, the country’s comparatively small population has kept its cannabis sales to just $2.6 billion last year, with a 2026 forecast of $6.4 billion.

Clearly, despite the headwinds, investors should be looking long and hard at the US cannabis markets. Mark Noble, EVP of ETF strategy with Horizon ETF in Canada, concurs, and notes the bureaucratic divide between the main North American cannabis markets: “Without federal legalization, most of the [Canadian] licensed providers have little to no access to U.S. market expansion.”

So let’s take a look at some US cannabis firms. According to the TipRanks database, these are Strong Buy stocks, with one-year upside potentials of at least 70%. Let’s find out what else they have to offer for investors.

We’ll start with TerrAscend, a cannabis company that has managed to cross the borders. TerrAscend has operations in US, Canada, and Europe. The US operations include vertically integrated ops in California, New Jersey, and Pennsylvania, along with licensed production in Maryland. TerrAscend is heavily involved in both the medical and recreational aspects of the cannabis markets, and works in all aspects of the industry, from cultivation and processing through to retail and marketing.

In June, the company launched its Kind Tree branded portfolio in the state of Maryland, and earlier, in May, TerrAscend opened a second medical cannabis dispensary in New Jersey. The new facility in the Garden State is 6,500 square feet, and offers a full range of TerrAscend’s branded medicinal cannabis products.

TerrAscend will report its 2Q21 numbers later this week, but a look at the company’s recent performance, in light of its expansion activities, may be informative in the runup to the quarterly release. In Q1, TRSSF reported $53.4 million in net sales, up 106% year-over-year, and saw cash flow from operations rise from a loss of $800K in 1Q20 to a gain of $13.3 million.

5-star analyst Matt McGinley, writing from Needham, is bullish on TerrAscend and clearly lays out why.

“We expect 2Q results to show strong sequential growth in revenue and EBITDA, but assume a more substantial inflection in 2H to deliver the full year revenue guide. TerrAscend has a very narrow, but highly productive footprint where we estimate 85% of revenue growth will come from PA and NJ in ’21. We expect NJ to be 10% of revenue in 2Q, but expect this to ramp to 30% of revenue by 4Q as cultivation and medical dispensaries are fully operational. We expect TER to finish ’21 with >$200mn in cash, and the company remains in a very strong position to acquire assets in other states,” McGinley wrote.

McGinley’s bullish comments back up his Buy rating on the stock, along with his $17 price target. At current levels, this target suggests ~108% upside for the year ahead. (To watch McGinley’s track record, click here)

It’s clear that Wall Street agrees with McGinley on the quality of TRSSF shares; the stock has a Strong Buy consensus rating based on 6 recent reviews. The $16.85 average price target implies an upside of ~99% from the current share price of $8.14. (See TRSSF stock analysis on TipRanks)

Next up is Curaleaf, one of the major cannabis companies in the US. A look at the numbers shows how Curaleaf has come to take a leading position in the US cannabis market. From its Massachusetts headquarters, the company maintains a presence across 23 states, with 23 cultivation facilities, 30 processing sites, and more than 100 dispensaries. Curaleaf’s focus is on states with large populations and limited cannabis licensing, including Florida, Illinois, Massachusetts, New Jersey, New York, and Pennsylvania. The company boasts an industry-leading market cap of $8.17 billion.

The company’s revenues have been steadily rising from quarter to quarter. The 2Q21 US sales top line, of $306.3 million, was a company record, and a 135% gain from 2Q20. Total revenues, including international sales, came in at $312 million.

Curaleaf has been fueling its revenue growth with an ongoing expansion of its production and retail presence. The company in May acquired the 66-acre Los Suenos outdoor growing facility in Colorado, one of the largest such grow sites in the US. In addition, Curaleaf activated almost 250 thousand square feed of ‘flower canopy’ growing facilities in 1H21, and has plans to bring online another 40,000 square feet during the second half of the year. The company now has approximately 2 million square feet of grow capacity. On the retail front, Curaleaf opened new stores in Illinois, Pennsylvania, New Jersey, and Maine.

“We remain encouraged by CURA’s revenue growth trajectory and continued visibility into margin expansion…. Looking ahead to the back half, the company will be opening its third NJ dispensary this month, while also scaling capacity to ready for the introduction of adult use. Further, in FL, the company anticipates adding 4-6 dispensaries in 2H21 (and closing 2022 with 60 dispensaries), though this is admittedly a slower pace than we had contemplated, as management acknowledged that the competitive landscape among the top 4 operators continues to intensify, such that retail location selection is taking longer than it had previously,” Azer noted.

The analyst summed up, “We raise our estimates, taking FY21 revs ahead of the midpoint of the guide to $1.28 bn, while looking for FY21 adjusted EBITDA margin of 27% (which includes a 1 pt drag from CURA International).”

In line with her outlook, Azer rates CURLF an Outperform (i.e. Buy), and her $25 price target indicates potential for 115% upside this year. (To watch Azer’s track record, click here)

With 9 reviews on record, all positive, Curaleaf gets a bullish Strong Buy consensus rating from Wall Street’s analysts. The stock is priced at $11.61 and its $22.84 average price target suggests ~97% upside potential. (See CURLF stock analysis on TipRanks)

Last on our list of US cannabis companies is Ayr Wellness, a producer of cannabis products for the health and wellness, medicinal-oriented market. The company has an extensive presence in the US with 51 open dispensaries, more than 100 products on the shelves, and over 550,000 square feet of cultivation space capable of producing some 120,000 pounds of cannabis biomass annually.

Ayr has been expanding its presence on a variety of tracks in recent months. In mid-July, the company acquired Tahoe Hydro, an award-winning, Nevada-based cultivation company, known for its high-quality cannabis flower products and concentrates. The deal is subject to regulatory approval, and is worth $17 million.

Also in July, Ayr entered the Illinois market. The entry comes through another acquisition, this one of Herbal Remedies, which operates two licensed dispensaries in the state. Ayr intends to purchase Herbal Remedies, after regulatory approval, for $30 million, which sum will include $8 million in cash, $10 million in stock, and $12 million in seller notes.

In August, Ayr’s expansion activities included opening its 39th dispensary in Florida, in the city of Ocala. The dispensary has 3,000 square feet of floor space and is located in a shopping plaza on a highly trafficked road. And finally, on August 16, Ayr announced that it intends to purchase Cultivauna, the owner of the Levia-branded cannabis infused seltzers. The move will give Ayr an entry to the cannabis beverage niche. Ayr will pay $20 million up front for the purchase, half in cash and half in stock.

Analyst Scott Fortune, of Roth Capital, took the measure of Ayr’s expansion in a recent note.

“We expected Ayr to bolster its NV wholesale footprint and view the timing favorably as NV continues to see a strong recovery in both tourism and spending…. Tahoe Hydro is already a well-known flower supplier in the state, growing cannabis for the renown Cookies brand. We believe the bolt-on acquisition both enhances Ayr’s wholesale capacity but also brings quality strains/genetics and cultivation talent and capabilities to leverage nationally selling high-quality craft like flower at scale. The transaction also adds NV Greens branded concentrates to the Ayr portfolio. Regarding IL, we believe this acquisition at a multiple of 5x 2021 EBITDA is favorable and allows the business to enter another limited license state in IL, which is currently running at a $1.8B sales run rate,” Fortune opined.

To this end, Fortune puts a Buy rating on AYRWF stock, along with a $55 price target that suggests a 99% one-year upside potential. (To watch Fortune’s track record, click here)

Overall, Ayr shares have a Strong Buy rating from the analyst consensus, based on 6 recent reviews that include 5 Buys and 1 Hold. The shares are selling for $32.80 and their $47.79 average price target implies room for a 12-month upside of ~73%. (See AYRWF stock analysis on TipRanks)