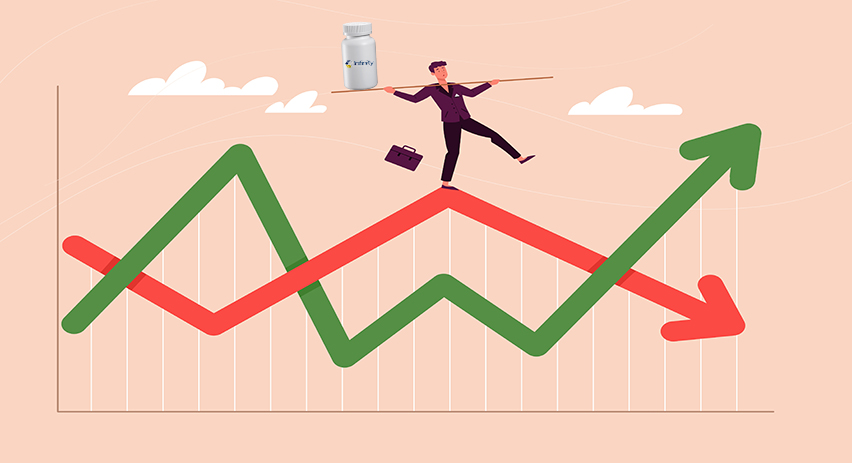 Violent swings in either direction are de riguer for biotech stocks, and usually occur following the release of positive/negative clinical trial results or approval/rejection from the regulators. What’s more unusual is to see those moves happen one day after the next – especially in opposite directions. But that’s what happened to shares of Infinity Pharmaceuticals (INFI) this week. During Tuesday’s session, the stock slumped by 31%, only to skyrocket by 61% the following day.

So, what’s behind the extreme volatility?

Results from the former trial were promising. In the group combining the drug with nivolumab, the median overall survival (mOS) in the intent to treat (ITT) population came in at 15.4 months compared to 7.9 months in the control arm of nivolumab on its own. After one year of treatment, 59% of patients in the ITT population given the combo were alive vs. the control arm’s 32%.

However, results from the latter study were disappointing, which showed limited improvement compared to previous results. Accordingly, a selloff ensued.

B.Riley’s Kalpit Patel thinks investors sold off shares “due to uncertainty on the regulatory path in mUC and relatively less promising results in TNBC.”

However, following the announcement of the results, one of Patel’s colleagues, at Wells Fargo, upgraded INFI’s rating and price target, believing the drug has big potential in the urothelial bladder cancer indication, causing the shares to spike.

Patel has a more measured view and still thinks Infinity will likely need to conduct a large-scale clinical trial to “show statistically significant differences.” The analyst also believes the drug’s path to approval could be complicated, causing him to lower the assumed possibility of success from 45% to 30%. However, he “does not believe investors should write off eganelisib—especially at present valuation levels—as urothelial cancer remains a reasonable opportunity.”

Accordingly, while Patel reiterated a Buy on INFI shares, the price target gets a trim and is reduced from $7 to $4. Nevertheless, there’s potential upside of ~89% from current levels. (To watch Patel’s track record, click here)

Looking at the consensus breakdown, Patel’s colleagues think Infinity’s prospects are bright. The stock has a Strong Buy consensus rating based on a unanimous 4 Buys. Moreover, there’s plenty of upside projected still; the $8.33 average price target suggests shares will rise ~293% in the year ahead. (See INFI stock analysis on TipRanks)