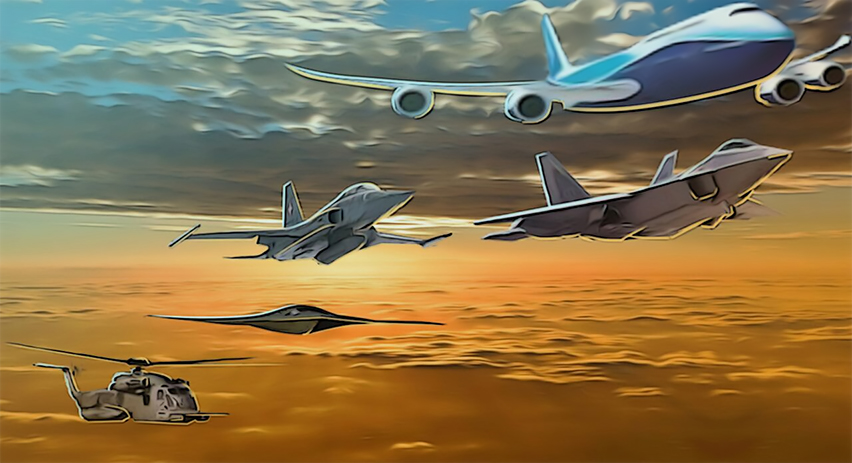 The aerospace industry remains a strong economic sector, with several built-in advantages for investors. First, the military is always looking to buy, even in times of budgetary retrenchment. Second, the industry includes both civilian and military segments, with a high degree of overlap. It’s no coincidence that the B-52 bomber’s re-engine project is seriously considering using engines originally designed for civilian airliners. And finally, as the name ‘aerospace’ implies, the sector’s outer limits are unbounded. And industrial sector that includes manned and unmanned aircraft, spacecraft, satellites, missiles, and rocket launch systems is almost certain to provide a solid investment opportunity.

Gross numbers can show that. In 2019, pre-pandemic, the global aerospace industry exceeded $324 billion in total value. The sector took a beating in the ‘corona year’ of 2020, along with the worldwide economy generally, and contracted to approximately $295 billion. But as economies reopen, airlines and militaries look to replace aging airframes, and new defense projects start to take shape, the aerospace industry is poised for growth again. By 2023, it’s estimated that the sector will pass the $358 billion mark, recouping all of the pandemic losses, and then some.

So let’s take a closer look at three aerospace stocks. According to TipRanks’ database, these are Strong Buy stocks, with double-digit upside potential between 20% and 50%. Here are the details.

We’ll start with Spirit AeroSystems, a major operator in both the civil and defense aerospace sectors. Based in Kansas, Spirit is the world’s largest manufacturer of first-tier aero-structures. The company has an extensive institutional knowledge of aluminum metallurgy and advanced composite solutions, and provides fuselages, integrated wings and wing segments, and pylons and nacelles for commercial airplanes, business and regional jets, and defense industry platforms. Spirit has global reach, with offices and facilities in the US, the UK, France, Morocco, and Malaysia.

In the second quarter of this year, Spirit reported continued gain in earnings and revenues and beat the market expectations. At the top line, the revenue of $1 billion was up 11% from 1Q21, and up an even more impressive 55% year-over-year. EPS came in at a loss, of $1.30 per share, but that was a strong improvement from the $2.46 loss reported in the year-ago quarter.

The company supported these gains by shipping out more products to its customers. In 2Q21, Spirit delivered a total of 243 shipsets, a highly favorable comparison to the 159 delivered in 2Q20. Of this total, 35 were 737 shipsets – for the latest model of the Boeing airliner – which was up from 29 in Q1 and 19 a year ago.

Earlier this month, Spirit scored a major coup for its industry, when it teamed with Lockheed Martin’s famous Skunk Works – the ‘dark’ defense research arm of the company – to reveal its new Polaris. Polaris is Spirit’s new digital engineering and advanced assembly demonstrator, using to validate product improvement.

Susquehanna analyst Charles Minervino sees a key growth factor here in the civil aviation business, writing: “Demand for domestic air travel in several major markets has been stronger than many had anticipated, and we expect this momentum to continue as economies reopen. SPR is well positioned to benefit from these positive trends as Boeing and Airbus look to ramp up production and delivery rates in response to rising demand from customers. Though widebody demand has lagged the narrow body segment, we expect the eventual easing of international travel restrictions to translate into incremental demand for new widebody aircraft, which would drive another leg of growth for SPR.”

To this end, Minervino rates SPR a Positive (i.e. Buy), with a $54 price target. Investors could be pocketing gains of 36%, should Minervino’s thesis play out as expected. (To watch Minervino’s track record, click here)

Overall, this stock has 7 reviews on record, and six are positive, like Minervino’s. The remaining one is a Hold, and SPR has a Strong Buy consensus rating. The shares have an average target of $56.57, which suggests ~43% one-year upside from the share price of $39.65. (See SPR stock analysis on TipRanks)

Now let’s turn to AeroVironment, an aerospace stock that is popular with hedge fund managers. In fact, ~80% of AeroVironment stock is owned by institutions. The company, which is deeply involved in the production of unmanned aerial vehicles – the famous drones – for the Defense Department, was founded in 1971 and saw $367 million in total revenues last year.

In recent weeks, AeroVironment has been introducing new products and scoring new defense contracts. Earlier this month, the company introduced the standardized modular payload interface kit for the RQ-20B Puma tactical surveillance drones. These kits meet a specification by the US Special Ops Command (USSOCOM) for a modular architectural standard to allow quick and easy integration of a variety of payloads on these drones. AeroVironment expects to deliver the kits – to a firm-fixed price order – by November of this year.

Last month, AeroVironment announced the award of a $22 million contract for beyond-line-of-sight satellite communications for mid-endurance unmanned aircraft systems. This is another USSOCOM award, and is part of an existing Indefinite Deliver, Indefinite Quantity (IDIQ) contract. Also last month, the company announced it had received $15.9 million in new orders from the US Air Force, for deliver of systems and spares for Puma 3 and Raven unmanned aircraft systems (UAS). The Puma order was delivered in April, while the Raven order is scheduled for delivery in November.

AeroVironment finished its fiscal year 2021 on April 30, and reported results in June for FY and Q4. The company showed top line revenue of $136 million for the quarter and $394 million for the year – both record numbers. The revenue was supported by a record backlog of funded orders totaling $211.8 million. During the fiscal year, AVAV made several acquisitions – of Arcturus UAV, Progeny Systems ISG and Telerob – which will allow the company to expand its addressable markets.

Canaccord analyst Austin Moeller is bullish on AeroVironment, especially in light of the company’s expansion.

Based on the above, Moeller rates AVAV stock a Buy, along with a price target of $140. Investors could be sitting on gains of 40%, should Moeller’s forecast play out as anticipated. (To watch Moeller’s track record, click here.)

How does Moeller’s bullish forecast echo against the word of the Street? Quite positively, it seems, as TipRanks analytics exhibit AVAV as a Strong Buy. Based on 4 analysts polled in the last 3 months, 3 rate the stock a Buy while one rates it a Hold. These analysts suggest that if everything goes as planned, AVAV will be a $130 stock in the next 12 months, implying ~28% return. (See AVAV stock analysis on TipRanks)

Last but not least is Howmet, a Pittsburgh-based aerospace manufacturing company known for its widely divergent product lines: jet engine components, titanium fasteners and structures for aerospace applications, and forged aluminum wheels for heavy trucks. They common denominator is high-end metallurgical technology – a key specialty in high-tech engineering and manufacturing.

Earlier this month, Howmet released its results for 2Q21, results that came in somewhat mixed. The top-line revenue was down year-over-year; the second quarter saw $1.2 billion in total revenues, compared to $1.25 billion in the year-ago quarter. EPS, however, was up, and strongly. The year-ago quarter saw a steep loss of 19 cents per share, while 2Q21 saw a net profit of 17 cents per share.

On a positive note, the company generated $164 million free cash flow, and ended the quarter with a cash balance of $716 million. Howmet achieved this after redeeming $476 million in debt and repurchasing $200 million worth of common stock shares. The company has a $1 billion revolving credit facility that is currently undrawn.

Looking forward, Howmet narrowed its full-year 2021 revenue guidance from the $5.05 billion to $5.20 billion range by bringing down the upper limit to $5.15 billion. The general outlook of $5.10 billion for the year remains unchanged.

Evaluating this stock after the earnings report, JPMorgan analyst Seth Seifman wrote: “Q2 was not a ‘shoot-the-lights-out’ quarter, but it was never supposed to be: Aero demand is still gathering and Howmet is assembling the people and preparing the equipment required to support it; meanwhile, disruption in the truck OEM supply chains is temporarily cutting in to Forged Wheel shipments, but final demand is robust.”

Seifman gives the stock an Overweight (i.e. Buy) rating, with a $39 price target that suggests a 21% upside in the next 12 months. (To watch Seifman’s track record, click here)

Howmet has the distinction of a unanimous Wall Street consensus rating – all four recent reviews are bullish, giving the stock its Strong Buy rating. Shares are priced at $32.2 and the average target of $39.50 implies ~23% upside from that level. (See HWM stock analysis on TipRanks)